The Savage Outside of White Argentina

This is an excerpt (the first few pages) of my essay in the forthcoming book Shades of the Nation: Rethinking Race in Modern Argentina (Cambridge University Press, 2015), edited by Eduardo Elena and Paulina Alberto. I'm particularly proud to be part of this interdisciplinary collection, which includes work by very talented scholars on what has been for too long a taboo topic in Argentina: race. 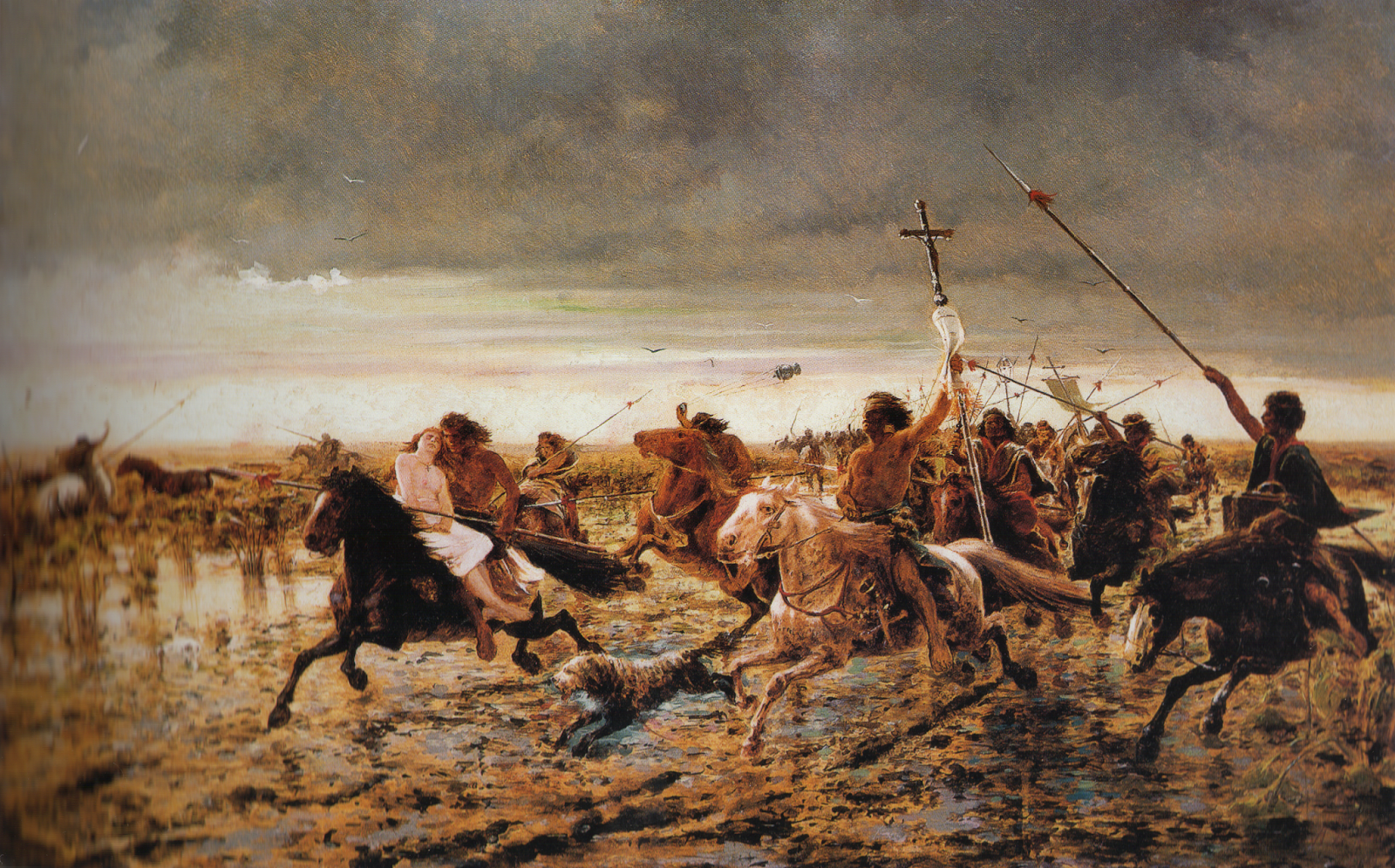 In early December 2013, several urban centers in Argentina went through a wave of turmoil that brought to light the sensibilities that have long racialized the national geography as harbouring a threatening, non-white abyss. In the province of Córdoba, thousands of police officers demanded a salary increase by withdrawing from the streets and remaining in their quarters, while undercover officers instigated the looting of stores in order to create a public demand for their presence. The news of the lack of police repression quickly spread and thousands of men and women from poor neighborhoods began storming stores and supermarkets to grab anything they could, from food to TV sets. The unrest spread to other provinces, most notably Tucumán. There, the same pattern unfolded: police forces withdrew from the streets to demand a salary increase and simultaneously organized the sacking of stores, rapidly prompting more widespread looting. With several cities shaken by riots, a significant portion of the population felt that the streets were dissolving amid a vortex formed by the expansiveness of los negros, “the blacks” —the racialized term used in Argentina to name the poor and people with indigenous or mestizo (mixed) completion.
On the streets, the social media, and the online forums of Argentine newspapers, thousands of people called for the violent extermination of “esos negros de mierda,” “those fucking blacks.” Armed vigilantes promptly began shooting at “los negros” as if the latter were savage hordes determined to overrun settlers circling the wagons on a hostile frontier. When La Nación informed that “a young man” (un joven) was shot dead in Córdoba, marking the first deadly victim of the violence, most readers posting comments celebrated his death as an act of civilizing justice. Many objected to the use of the phrase “a young man” to name what was just un negro. A reader added to this explicit dehumanization of the victim, “Too bad it’s only one. I wish there were two hundred negros dead.” Similar comments flooded Tweeter under the hashtag #Negros de mierda. When the violence subdued two days later —once the federal government sent forces to Córdoba and the provincial governments abided by police demands— over ten people were dead and hundreds were wounded. In those days, many compared the looters with the Indians that in the nineteenth century threatened the boundaries of Argentine civilized space. Conservative writer Abel Posse wrote in La Nación that in Tucumán a relative borrowed a shotgun, formed a vigilante patrol, and locked up his wife and children. He felt as if “un malón” was about to raid their home, evoking the parties of indigenous combatants on horseback who once controlled much of the national geography. 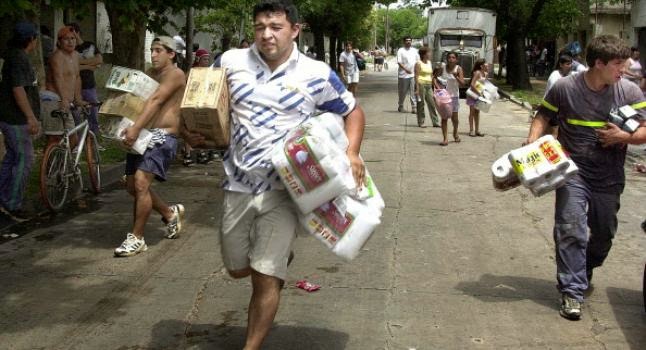 The way that this unrest was experienced and racialized by a significant portion of the population is notable because Argentina has long stood out in Latin America as a nation that claimed to be white and racially homogeneous, due to the salience of European immigration at the turn of the twentieth century. Furthermore, Argentine political and cultural elites have long insisted in public that one of the merits of the nation is that “we don’t have problems of racism.” I personally heard center-left presidential candidate Raúl Alfonsín repeat this line with conviction at several speeches during the 1983 campaign, and almost two decades later conservative writer Marcos Aguinis began his book on the Argentine condition making exactly the same claim. Yet in Argentina this self-congratulatory narrative about a racism-free society has long coexisted with the everyday use of a heavily racialized language to name, with disdain, esos negros de mierda: the millions of Argentines who are explicitly marked as the despised non-white part of the nation. This racialization is part of a hierarchical class formation, for “los negros” also names the poor. Yet that the poor are called “los negros” (and not something else) reveals how racial sensibilities inform class perceptions in Argentina. And when “the blacks” appear as a menacing presence on the streets, as in late 2013, it is common to hear passionate calls —entangled with openly racist slurs— for their extermination, on the grounds that “los negros” are dangerous and not fully human. 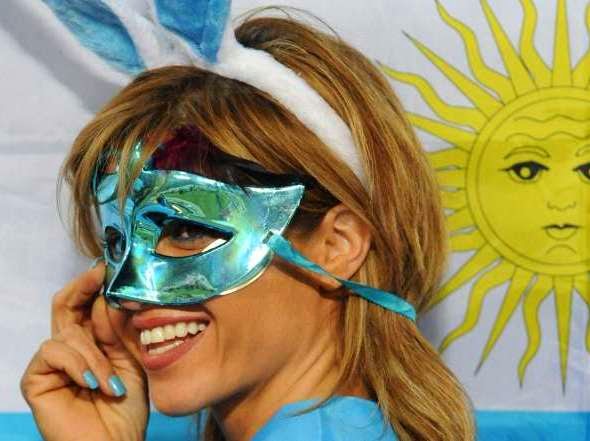 Several scholars have noted this contradiction in Argentina between claims to racial homogeneity and tolerance and the everyday reality of a profoundly racialized and racist society. As Alejandro Grimson aptly put it, in Argentina the same person can claim to live in a white nation without racism and add, shortly thereafter, that half of the population is made up of “negros de mierda.” This tense oscillation is certainly at the core of the specific configuration of whiteness in Argentina, but its affective and spatial dimensions have been overlooked. Grimson and other authors have tackled this paradox by arguing that whiteness in Argentina is a myth or an ideology: a discourse that misrecognizes the existence of millions of Argentines of indigenous and mestizo background and seeks to make invisible, and therefore legitimize, racialized forms of hierarchy. Whiteness in Argentina does, indeed, have mythical and ideological dimensions, but I hereby examine it as an affective and geographic formation that is in denial of its existence because it is not reducible to a conscious ideology and operates at a pre-discursive, emotional level.
In this essay, I propose to name this racialized disposition toward space as La Argentina Blanca, White Argentina. I do not conceive of this term, it is important to note, as a bounded entity made up of Argentines of white skin. Many of the fiercest critics of La Argentina Blanca are light-skinned Argentines with blue eyes (such as writer Osvaldo Bayer) and some of its staunchest defenders have indigenous ancestry (like the former governor of the province of Salta, Juan Carlos Romero). I conceive of White Argentina, first and foremost, as a geographical project and an affective disposition defined by the not always conscious desire to create, define, and feel through the bodily navigation of space that the national geography is largely European. But this is a haunted and ever-incomplete project, a whiteness that feels under siege, for it permanently confronts that millions of Argentine citizens bear in their bodies the traces of the non-European substratum of the nation. White Argentina, in this regard, is an affect in the relational, inter-subjective, and material sense that Spinoza gives to this concept: the capacity to affect and to be affected by other bodies. And few things affect White Argentina more profoundly than the appearance in public space of spatially expansive multitudes of “negros.” 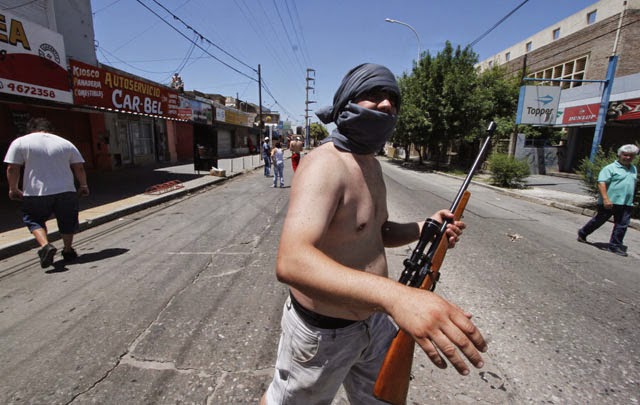 The affective nature of White Argentina is apparent in its visceral reaction to events like those of December 2013. While riots create anxiety and fear in any social setting, in Argentina these fears usually trigger widespread calls for the mass murder of “los negros,” embodied in the cry “a esos negros de mierda hay que matarlos a todos” (“those fucking blacks should all get killed”). These calls for civilizing and genocidal violence (i.e. this desire to kill all negros) are rationalized as condemnation of criminality; but they primarily express rage at the evidence that Argentina is not a white nation. The appearance of dark-skinned multitudes affects White Argentina as if it were a spatially dissolving force that that opens up, from within the nation, a huge, terrifying outside: an abyss that resurrects el malón that the founding fathers of White Argentina thought they had exterminated in the late 1800s, and that Abel Posse’s relative in Tucumán felt had reappeared in 2013.
El malón is one of the most extraordinary figures in Argentine history; it alludes to the indigenous cavalries that for centuries launched stealth, high-speed attacks on frontier settlements in the pampas of central Argentina and in the tropical lowlands of the Gran Chaco, reaching the gates of Buenos Aires, Córdoba, and Santa Fe and eroding the boundaries of state territoriality. As a historically-specific configuration, el malón was destroyed by the Argentine state in the 1870s and 1880s. But el malón can also be examined as a spatial, bodily, and affective formation that has outlived its original historical conditions. Indigenous cavalries no longer exist, but the assertive and expansive spatiality they once represented is still regularly evoked in Argentina. When in the twenty-first century the term malón is used to name looters or simply the poor taking to the streets, it evokes to White Argentina the bodily, tangible return of the barbarisms of the past. 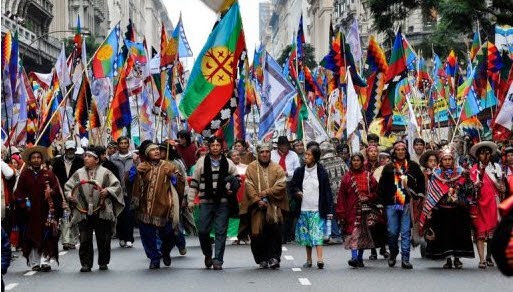 Jacques Derrida argued that the ghost is something that seemed to have disappeared but always returns, reappearing again and again. To speak of specters, he wrote, is to speak of their return. It is in this sense that el malón can be said to be a ghostly figure in Argentine history: as a force that had allegedly been destroyed but that continues returning to haunt those who dream of a White Argentina.

Posted by Gastón Gordillo at 1:19 PM No comments: