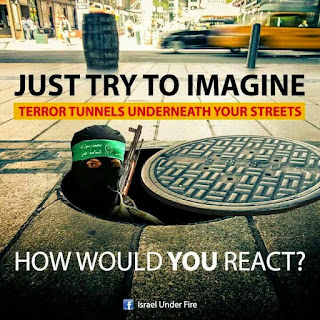 The people of Gaza have long been punished by the Israeli state for refusing to live in a ghetto, but in July and August 2014 the punishment was particularly severe, for Palestinian dared to use militarily the only space they can control: the underground. One of the most powerful militaries in the world became vulnerable to attacks by combatants moving through an invisible network of tunnels carved out in the crust of the Earth: the only part of the terrain that the Israeli military cannot master. In response to the tunnels, the Israeli military unleashed such levels of violence on Gaza that it killed 2,300 people, most of them civilians, and reduced thousands of homes and Gaza’s civilian infrastructure to rubble. This destruction was the reactive response to the perceived power of the underground to help poorly armed men outmaneuver a high-tech military that can see almost anything except what lies underneath the planet’s surface. 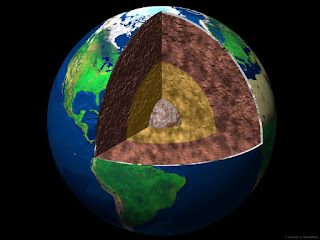 The underground is the largest space of our planet: all-pervasive in its presence; invisible to our ordinary senses; impossible to apprehend in its vastness. For most humans, the ground marks a limit. But in Gaza, besieged from land and sea and surveilled and attacked from the sky, the ground has become a horizon: a path toward matter than can be hollowed out by human labor and turned into vectors of undetected mobility. Palestinians first dug tunnels along the border with Egypt to smuggle goods essential for everyday life and defy the Israeli blockade. As Eyal Weizman has shown, this was also the Palestinian response to the politics of verticality enforced by Israel in its control of the airspace and of all hilltops in the West Bank in order to have a wide field of vision from above. In creating the tunnels, Palestinians countered that verticality with a verticality of their own, moving down and beyond the reach of that panoptic eye. By 2014, the tunnels had expanded to form a much vaster and deeper infrastructure that was militarized and, more importantly, designed to pass underneath the hyper-militarized Israeli border and emerge “on the other side,” within Israeli territory. Israeli officers called these underground passages “offensive tunnels,” in contrast to the “defensive tunnels” along the Egyptian border. But as a whole this is basically an infrastructure of self-defense: it was created by a population submitted to a restrictive siege by one of the most powerful militaries on the planet, facing adverse living conditions and a profoundly asymmetrical confrontation. And this subterranean infrastructure of resistance involved not simply the production of a new type of place but the weaponization of the terrain of planet Earth. 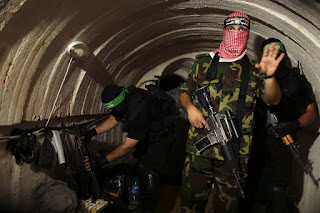 As soon as combat began in and around Gaza in early July 2014, it became clear that the confrontation adopted a different rhythm because of the impact of the tunnels. In a gripping video, Palestinian combatants (one of them holding the camera) can be seen emerging from a tunnel behind the militarized fence, running for a few hundred meters in the open, and then overrunning a fortified Israeli outpost after a brief firefight. Then you see the combatants retuning safely back to the tunnel’s entrance loaded with captured Israeli weaponry, closing off the lid behind them, and finding shelter in the underground.
On the night of July 17-18, after days of bombings by Israel and rocket attacks flying from Gaza toward Israel, Israeli ground forces entered Gaza from multiple points with the explicit goal of wiping out what they called “the tunnels of terror.” As Glen Greenwald insists, the word “terror” has become a meaningless and purely ideological category solely used by state agents to name any type of resistance committed by “them” against “us,” often misnaming what is standard combat between armed humans. While the Israeli military falsely claimed the tunnels were designed to attack “Israeli kindergartens,” the tunnels were largely used to attack the IDF forces surrounding and invading Gaza. Despite carrying highly destructive and sophisticated weaponry and counting on full control of the airspace via helicopters, jets, drones, and satellites, the Israeli ground forces entering Gaza suddenly faced a hard-to-control terrain because of their enemy’s capacity to move undetected through the tunnels. 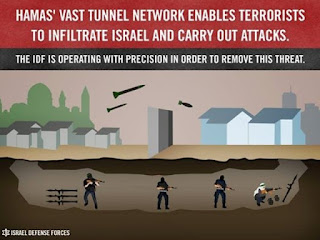 The New York Times wrote, “Israeli troops in Gaza described Hamas gunmen who vanished from one house, like magicians, and suddenly popped up to fire at them from another.” In The Art of War, Sun Tzu argued that one of the most important goals in combat is to deceive the enemy: by pretending, for instance, to be “in the east” only to strike “from the west.” Likewise, Palestinian fighters turned the terrain into a space of deception, and used “tunnels to surprise the forces from behind and to attack those in the rear,” confusing Israeli troops, who “find themselves having to improvise.” “What caught the Israeli off guard,” he article continues, was the “sophisticated” use of those tunnels, which created a “360 degree front” that undermined the Israeli forces’ situational awareness. Noting the growing “frustration” among Israeli officers, the same article in The New York Times quoted “military experts” who argued that “it is increasingly evident that the Israel Defense Forces have been operating from an old playbook and are not fully prepared for a more sophisticated, battle-ready adversary.” 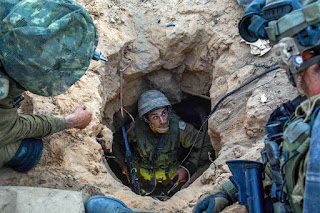 Facing this inscrutable obstacle in their capacity to control Gaza’s battlefield, “the terror tunnels” became the media’s obsession and the object of the Israeli hard-right’s fury. On July 24, Martin Sherman published in the Jerusalem Post a piece entitled “Why Gaza Must Go.” He highlighted the anxieties created by the tunnels and criticized the myopia of Israeli officers who did not foresee their “deadly” and “chilling” menace: “the devastating potential of an elaborate tunnel system developed by the terror organizations in Gaza.” Sherman argued that the “mowing the lawn” strategy of regularly punishing Gaza with intense moments of violence had failed. He concluded, “The grass needs to be uprooted – once and for all. …. The only durable solution requires dismantling Gaza, humanitarian relocation of the non-belligerent Arab population, and extension of Israeli sovereignty over the region….” The insurgent underground, in short, was perceived to be so threatening that it triggered calls for the physical obliteration of the whole of Gaza. 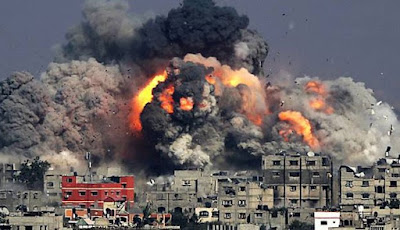 This call for massive destruction was not an abstract projection into the future but the disposition that guided the Israeli struggle against the tunnels, something that became particularly apparent in early August in the southern edge of Gaza, Rafah. On August 1, Palestinian combatants emerged from a tunnel to ambush a small Israeli force, killing two soldiers, capturing one, and retreating again to the underground. This activated Israel’s infamous “Hannibal directive,” which gives the command to direct overwhelming firepower at the area where the soldier is believed to be captured, with the goal of killing him to prevent him from becoming a hostage. Over the next three days, Rafah was subjected to such a devastating and deadly barrage of bombings that between 135 and 200 civilians were killed and hundreds of homes were reduced to rubble. Eyal Weizman’s Forensic Architecture team has recently completed (co-produced with Amnesty International) a must-read analysis of the devastation inflicted by Israeli on Rafah in those days (you can read the report here; see also the excellent analyses by my friends and fellow bloggers Léopold Lambert and Derek Gregory; you an also read my review essay of Forensic Architecture’s extraordinary book Forensis here). Through the careful examination of multiple forms of evidence (rubble, video, photographs), Forensic Architecture’s investigation shows that the target of the heavy bombing was the underground. The bombing targeted all buildings suspected of hiding the entrance to the tunnels over a wide area. This extreme level of violence unleashed on Gaza, in short, resulted from the Israeli exasperation at the disorienting spatiality created by that opaque underground.
In response to wave of terror unleashed in Gaza in those days, Amir Nizar Zuabi wrote in Haaretz an evocative piece called "The Underground Ghetto City of Gaza." In it, he imagined that ten years into the future Gaza would be abandoned after everybody moved underground. “We dug entire neighborhoods, streets, highways, schools, theaters, hospitals. We gave up on the dream of getting out of the Gaza Strip. … We, who were attacked from the sky, from the sea, from the fields, who had one-ton bombs dropped on our heads in pointless rounds of killing, have turned our back on life. We, whom the world forgot, decided to pay it back in kind, and forgot it right back. … The only refuge left to us was the earth.” In this account, the underground is no longer a weapon of resistance but a destination, a line of flight: a path toward exodus and withdrawal. 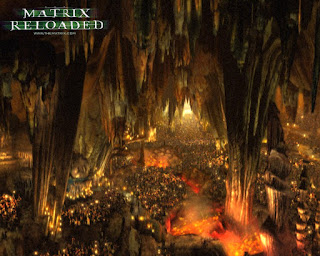 This politicization of the underground has a significance that goes beyond Gaza. The idea that people facing powerful oppressors may have no other option but to give up the ground and retreat downwards toward the planetary crust is a central theme in the films The Matrix and The Hunger Games: Mockingjay, where rebels plotting revolution have created underground cities, not unlike the one Amin Zuabi imagined in his piece on “the underground city of Gaza.” Hollywood here draws from the long history of rebels who have weaponized the underground. In some cases, ironically in the Bar Kokhba revolt (132–136 AD) by Jewish combatants against the legions of the Roman Empire, the use of tunnels and caves did not prevent defeat. In others, the military appropriation of the underground was key to the resilience and ultimate victory of insurgent forces, as in the case of the vast network of tunnels created by the Vietcong in South Vietnam in the 1960s and early 1970s.
Certainly, the underground has long been militarized and manipulated by state militaries as well: to mine enemy trenches (as Derek Gregory has analyzed in the case of World War I) or to create bunkers and hidden weapon systems. But if the state can be said to have a political attitude toward the underground, it is one of unease, for no state can fully control the entrails of the Earth. For this reason, in 2010 the US Department of Defense created a project called “Transparent Earth,” designed to create (using sound waves) a three-dimensional mapping of the crust to a depth of five kilometers. As the name indicates, the ambitious goal is to turn the underground into something it is not: a transparent object. As Ryan Bishop writes in his analysis of this program in the book Forensis, “Mastery is inescapably haunted by that which eludes it.” The destruction brought upon Gaza a year ago was the materialization of this principle, for that barrage of firepower by the Israeli state was haunted by the underground that eluded its mastery. The tunnels of Gaza, and the anxieties they generated, reveals that what embodies our imperial present are not simply drones but also those places that drones can’t see because they are hidden in the terrain.

Posted by Gastón Gordillo at 11:09 PM No comments: