The Revolution Is Not Being Televised 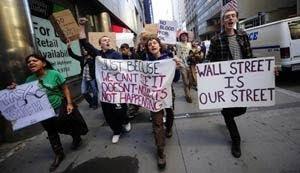 During the Egyptian insurrection, the Mubarak regime tried to counter the multitudes on Tahrir Square by avoiding mentioning them on the state-run TV. The so-called liberal media in the United States highlighted that this authoritarian media blackout brought to light the freedom of expression we enjoy in “the West.” This is why the US media silencing of over a week of protests on Wall Street reminds us that New York City and Cairo, despite the different scale and tone of the unrest, are not that different from each other after all. Further, the power of the media in the United States to silence political events that may disrupt the status quo is comparatively vaster and probably more widespread and effective. And in the nation that defines itself as the land of the free, media blackouts are created not by the state but by that peculiar branch of corporate America that, with the full support of the state, profits from the creation of what qualifies as news.

For the past eight days, a remarkable grassroots movement against the capitalist looting of the commons inspired by similar protests in Spain, Greece, and Egypt has disrupted Wall Street, the spatial core of the global financial system. A crowd has camped out in public spaces, staging protests, and organizing assemblies to debate the social devastation created by the bankers based in the surrounding buildings. From day one, the blackout of the protests in the US media was eerie. Whereas a handful of wacky Tea Party activists always receives widespread coverage, “occupy Wall Street” was treated by all major corporate media outlets as a non-event (with a few exceptions that highlighted the media blackout, like Keith Olbermann). On Friday, September 23, as the protests entered their first week, The New York Times confirmed where its priorities are in the production of what is (and what is not) newsworthy by running on its front page an article about the worrisome rise in the theft of pigs in rural Illinois. 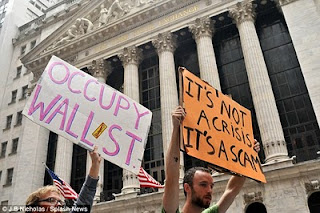 On Saturday, September 24, The New York Times was finally forced to partly lift its Pravda-esque silence. But this only happened because protesters became dangerously mobile and began marching uptown spreading their noisy anti-capitalist message and were arrested by the dozens for no other reason than protesting. The article trivializes the protest as a quasi-hippie gathering led by “noble” but confused and misinformed youths who “say” that the financial system “favors the rich and powerful over ordinary citizens.” The abrupt and unambiguously hostile coverage reflects the shift from what Michel-Ralph Trouillot called a formula of erasure to a formula of banalization, which are both operations of silencing. The silencing is the mandate by corporate America to treat potentially threatening political movements as non-events.

In other entries, I analyzed how the spatial spread of the insurrections of North Africa and the Middle followed a process of resonance expansion, through which thousands of people coming together on the streets created politically affective messages that resonated with countless other bodies elsewhere, often through alternative media that evaded state censorship. This is why counter-revolutionary efforts in those countries sought to contain the expansion of those insurgent resonances by all possible means, including violence, censorship, and the transformation of the official media into a machinery set out to prevent the spatial expansion of those resonances. In the United States today, more so than in any other country on the planet, the political machineries that work tirelessly to prevent anti-corporate resonances from expanding are owned by the same corporate forces that profit from the devastation that is wreaking North America and Europe. As Michael Parenti forcefully put in the film The Panama Deception, “The media is not associated with or allied with corporate America. The media is corporate America." 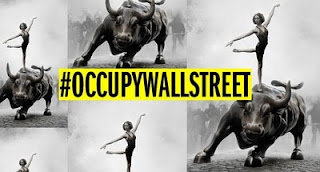 As in Egypt or Tunisia, the protests in New York are spreading and growing through alternative media and the internet. But this expansion has so far been largely contained by the media blackout. Maybe it is time for the protesters in NY to follow the lead of protesters elsewhere in the world and challenge the blackout not only by calling and emailing news stations (as many are doing) but also by protesting at the gates of those stations’ buildings. In Egypt, the multitudes in Cairo eroded the censorship of the state-run TV by simply surrounding its main building and demanding to be heard. Hours before Mubarak fell, these multitudes forced those inside the TV station to turn their cameras onto the streets and change the tone of the coverage. The same happened in Caracas, Venezuela, on April 13, 2002, when millions of people took to the streets to oppose the US-sponsored coup against Hugo Chávez. As protests raged all over Venezuela, the private TV stations that were involved in the coup and controlled all airwaves played movies and soap operas. This Orwellian erasure of the insurrection by the corporate media only came to an end when thousands of protestors surrounded the stations demanding that their opposition to the coup be shown on TV. Indeed, The Revolution Will Not be Televised, as Gill Scott-Heron wrote in the 1970s. Except that we should probably change the tense of the verb in this now famous phrase, for this is not a silencing that will happen sometime in a distant and abstract future but is happening right now, in the year of the beginning of the globalized insurrections against the imperial order of things. 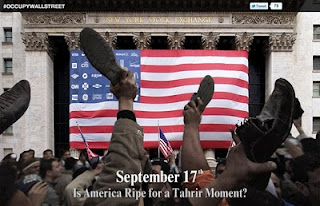 The popular insurrections in Cairo and Caracas remind us that the seemingly deterritorialized power of media conglomerates is ultimately grounded in the actual spaces where a select group of individuals manufacture and disseminate “news.” And those events reveal that under conditions of media censorship it is ultimately in those spaces that these actors are politically most vulnerable and, in the US, most sensitive to their public image as sources of news. Any such protest at the gates of The New York Times will no doubt trigger, aside from aggressive tactics by the NYPD, predictable accusations that it involves “fascist thugs” trying to curb the media’s “freedom of expression.” But the past eight days in New York have made apparent that this is just the freedom of corporate America to shut down the growing grassroots opposition to its ongoing looting of public wealth.
Posted by Gastón Gordillo at 3:05 AM No comments: