On the Imperial Edge of the Void 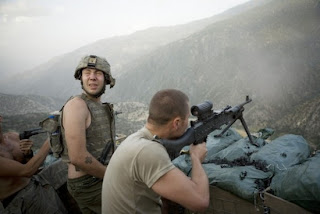 Tim Hetherington’s and Sebastian Junger's Restrepo is an enthralling journey to the edge of Empire, a space in which the imperial fabric folds to reveal a hostile outside, the Korengal Valley and the rugged mountains of eastern Afghanistan. This outside is a spatial and affective vortex, the territorial sanctuary of an insurgent war machine that has worn out the imperial military for close to a decade. But this outside is within Empire, for there is no space on the globe that is beyond imperial sovereignty and its violence. The valley is relentlessly bombarded from the skies and scrutinized from above by the imperial field of vision (drones, helicopters, jets, satellites). Yet this vertical mapping gazes at an opaque terrain.
“The map is not the terrain.” Alfred Korzybski said this in 1931, but we have not theorized this distinction profoundly enough. I draw on Restrepo to begin exploring some of the tentative layers of a theory of terrain. The troops on the Korengal Valley know damn well that the map is not the terrain. They know that terrain can hardly be represented. The terrain of the valley affected them viscerally the first time they saw it from the helicopters that flew them in. “Holly shit. We are not ready for this.” They were not ready for that terrain. They were affected by the void. 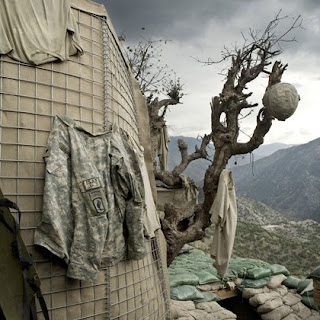 Restrepo documents the affective power of spaces constituted by unrelenting violence. It documents how bodies are affected by the abrupt folding of Empire and by the violence emanating from a hostile spatial outside, so hostile that it adopts the form of a vortex. Restrepo opens a gripping (and censored) window into those invisibilized spaces in which imperial forces are taking a beating and bleeding. It is also a stunning ethnography of the texture of a terrain defined by striations that limit the mobility of imperial troops horizontally and vertically (more similar, for this reason, to the rugged terrain of the anti-French insurgencies in the Algerian mountains than to the jungles of Vietnam). And those same striations on the landscape (rock formations, bushes, forests) are the material forms that hide and protect insurgent bodies. There is nothing that imperial militaries hate more than fighting insurgencies in striated space. They would much rather fight in spaces they fully control: the oceans, the skies, or open savannas. Smooth space. 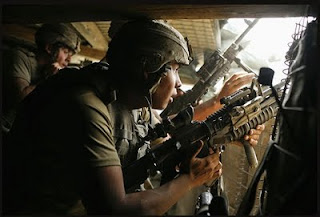 They arrive in the outpost at the valley, clinging on rocky and steep slopes. The defences protecting the perimeter resemble a fort in Apache territory. The site is permanently under fire. “I could not believe they were taking machinegun fire every single day.” The permanent cracks of firefights, four or five times a day. As if a whole multitude was shooting at them from everywhere. “Did everybody in the whole of Afghanistan come here to shoot at us?!” The terrain around the outpost seemed saturated by that bodily multiplicity that scattered, moved around, dissipated, and regrouped, always coming back. Always invisible. “You never saw the enemy. It was like we were fighting ghosts. They were so well camouflaged and know the land so well. It was like fighting ghosts. Eerie actually.” They know the land so well and were so well camouflaged. "We don’t belong there." 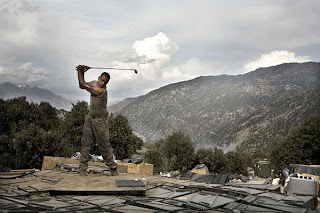 Restrepo the man dies. Restrepo becomes the name of the small outpost built on a nearby hill (they were shot from there all the time). Restrepo was a bold move that created a walled compound surrounded by even more hostile space. Firefights everyday. Patrols occasionally leave the outpost, always in trepidation. The landscape is opaque. A small village is not far off, clinging on the side of mountains. They could be anywhere, everywhere. The patrols regularly make contact. “Make contact,” military talk with Spinozian sensibility. Assemblages of bodies moving in heavily striated space and getting closer to each other and finally unleashing their firepower onto each other. Contact is literal. Bodies are hit. Combat as an intensely bodily and violent affectation.
This is how they learned about boundaries. The absolute limit is right there. Pretty close. Impossible to go farther. Their violence seems unrelenting. One soldier wonders if the insurgents ever rest. Staring at the mountains, an officer hosting a visitor points to a rocky ridge a few hundred meters away. That is the edge. Beyond, he says, it's “Enemy Sanctuary.” Several people mentioned that word. Sanctuary. They did not go there. That is the edge of the vortex. An edge produced by violence. 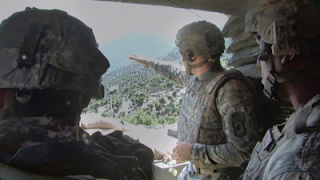 Based on their personal correspondence, Alain Badiou wrote that Gilles Deleuze saw the expression “on the edge of the void” as the intersection between the territory (the space of actualization) and the process of deterritorialization, the “overflowing of the territory by the event” (Deleuze: The Clamor of Being, p. 84). Restrepo is an intersection between the territory of imperial sovereignty in the Korengal Valley and the deterritorialization created by the war machine (Deleuze and Guattari), which overflows the valley with the event and the negativity of an anti-imperial insurgency. Badiou adds something else. He tells us that Deleuze commented that “this is the point at which what occurs can no longer be assigned to either the territory (the site) or the non-territory, to either the inside or the outside. And it is true that the void has neither an interior nor an exterior.” The void is outside and inside at the same time, without interior or exterior. Territory and non-territory. The vortex as high-speed, uncoded movement. A fold perpetually folding upon itself.
They are asked about their most terrifying experience of their deployment. No one doubts what the answer is. Operation Rock Avalanche: the jump into the void (the operation’s name accurately anticipated what affectively fell on them). They were told it was time to flex some muscle. The swarms surrounding the outpost were getting way too close, even stealing the gear and weapons of fallen soldiers. Enough of playing perpetual defense. Troops were to jump off the edge on Chinook helicopters and be dropped off somewhere in the insurgents' “safe haven.” The soldiers were stunned. That is the fucking void! “Those are areas we haven’t previously been.” They did not know the terrain. They had heard that others that ventured there were “fucked up.” 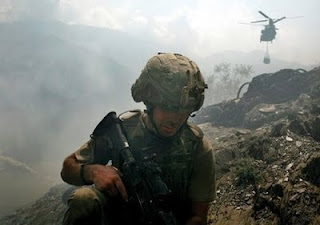 They get there, the helicopters take off, they move in the dark. They do not know the terrain. They carefully trek through forests that in another universe could have been beautiful but that are opaque, eerie, suffocating. It’s now daylight. Jets and attack helicopters give them cover by pounding the slopes of mountains as if trying to punish the terrain. Civilians get killed. Bodies of American and indignant but fearful Afhganis interact in a village. A bad encounter. Bodily affects regulated by dissonance.
Imperial velocities support them from the air, but a few hundred meters below the terrain opens up into the void of the vortex. They know they are being followed. They feel, often hear (or think they hear) bodies encroaching on them. “I saw a lot of professional tough guys weak in the knees.” Bodies that they can’t see but that are affecting them, making them jumpy. They could make contact at any minute. Their bodies captured on film say they can feel the swarm nearby, encroaching. The swarm was also waiting for them.
It was a textbook ambush, with two heavy machine guns flanking them. They fire back. Screams. Branches blow off. Bodies hit left and right. One body does not move. It is now a corpse. It is the corpse of their very best combatant. “If he dies what about us?” One man breaks down, asks the corpse to get up in desperation. The whole platoon is affected. The KIA is evacuated. They still don’t know where the enemy is.
The void has its own temporality, which in folding space as an outside of Empire slows imperial forces down. It is also the patient temporality of the long war of attrition, “the peasant method of combat” (as Paul Virilio called it in Bunker Archaeology, p. 22). The imperial military machine prefers short, high-speed wars. A two or three-day war (Panama, Grenada) is the perfect imperial war. But in the void the war machine draws the heavy militaries of Empire into a vortex of slowness, as it has happened in the striated terrains of Algeria or Vietnam. And in the same striated terrains disliked by imperial militaries insurgencies thrive on their own velocities: the rhizomic, multi-polar speed of swarming, which has outmaneuvered modern armies since Napoleon’s defeat in Spain (in a future essay I hope to examine the crucial relationship that exists between rhizomic speed and striated space). 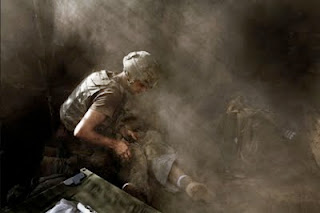 They learn that Chosen Company took heavy casualties somewhere else. Nine dead, many wounded. Everyone is affected. The commander rallies the men, tries to modulate their affective despair. He strikes a call for vengeance. “I say we go and make them feel the way they make us feel.” It is official. The war is also a war of affects. We are going to make them feel the same way they are making us feel. We want to affect them. It is part of the vortex. A wall of mirrors creating violent patterns of mimesis and alterity that feed on each other (Michael Taussig explored this spatial void in his famous ethnography on the Colombian and Peruvian Amazon).
Yet another attack on Restrepo. Everybody is shooting at something. Thousands of bullet caskets pile up on the ground inside Restrepo. A sniper shoots repeatedly and hits a body in the distance. From his facial expressions, we notice that he got him. The kill affected everyone around him. They cheer and scream, over and over again. “Motherfucker. Shoot us again!” The corpse cannot move but is still affecting the living. The corpses of their enemies and those of their friends, all of them having the power to affect them. “Whenever we got to kill someone and see it, it was a good day. It was a good day.” It was a good day because they had killed a ghost and gave it a bodily form that they could fucking see. Seeing the corpse confirmed those ghosts are human, they can get killed after all. On the anniversary of Restrepo’s death, they fired a flare in the night to commemorate their friend’s death in the place where he was killed. A space affected by the presence of his ghost. 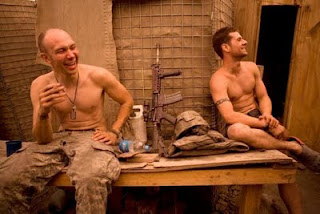 “Everyone was scared all the time. We were fucking scared all the time.” They hated that place. Restrepo. They felt bad at first for naming such a lousy place after their comrade. They hated that place. The men are getting ready to leave. “Leaving Restrepo is too good to be true. We were going to die here.” It is hard to believe they survived the void. They want to leave and never be back. “Never coming back, never coming back.” They board the helicopter. The camera rises up together with the chopper and we see from above the outpost getting smaller and smaller amid the immensity of the valley.
“A fifteen-month deployment in Restrepo is going to affect you,” someone had said earlier. Deleuze said that you don't need to be versed in philosophy to intuitively understand Spinoza's geometry of affects. The men understood. They were leaving Restrepo, but that terrain had already affected them. They left, but haunted by affects that sucked them back into the void. The outpost that haunts them does not exist anymore. It has been overflowed and deterritorialized by the outside. 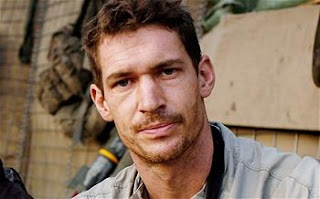 Posted by Gastón Gordillo at 2:58 AM