The Tallest Ruin in the World 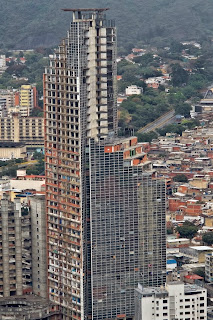 In Society of the Spectacle, Guy Debord argued that capitalism neutralizes critical dispositions through the hypnotic power of its spectacle of commodities, mass advertising, light, films, color, and excess. What Debord doesn't analyze is that this spectacularity requires the production of spectacular space: that is, space made to look imposing and dazzling. If there is one architectural form that embodies the spectacular nature of capitalist space, it's the skyscraper: the monument that most national elites seek to emulate and make taller, from Shanghai to Dubai. Skyscrapers are, as Henri Lefebvre long noted, phallic and arrogant structures whose verticality seeks to induce a state of disarming awe at the prowess, wealth, and creativity of the rich. This is the disposition that Walter Benjamin discovered in the bourgeois architecture of nineteenth-century Paris, where arcades, boulevards, and world fairs created a state of complacent daydreaming. In the early twenty-first century, this daydreaming emanates from the verticality of the skyscrapers that define the skyline of New York City, Dubai, and Hong Kong. In the words of David Nye, skyscrapers have come to embody "the geometrical sublime." But like all human-made objects, these sublime fetishes of global capitalism are haunted by their future ruination. After all, as Žižek put i, the fetish is “an object that conceals the void.”
If the interruption and voiding of the spectacular spatiality of global capitalism has a planetary core, it is probably Venezuela. As Sujatha Fernandes and George Ciccariello-Maher have shown, the empowerment of the Venezuelan poor under Chávez has been a territorial force that controls and disputes spaces and that asserts local forms of grassroots autonomy from the old elites and the Chavista state bureaucracy. This appropriation has involved one of the most notable ruins in the world, La Torre de David: The Tower of David. This is an unfinished forty-five-story skyscraper, one of the tallest in South America, which was abandoned when its owner David Brillembourg died and his company went bankrupt because of the profound financial crisis that hit Venezuela in 1994. In 1998, the anti-elite sentiments created by the massacre of protesters in Caracas in 1989 led to the election of Hugo Chávez as president. This was the birth of the Bolivarian Revolution and the beginning of the turn to the Left in South America. By 2007, The Tower of David had been abandoned for ever a decade when hundreds of people began moving in and colonizing its solid yet empty structure of concrete, glass, and steel. Today, close to 3,000 men, women, and children have turned the Tower of David into their home. 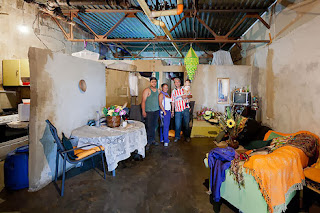 In a piece in The New Yorker, Jon Lee Anderson called The Tower of David “the tallest slum in the world.” Replicating U.S.-centered, neoconservative narratives of “failed states,” he wrote, “Caracas is a failed city, and the Tower of David is perhaps the ultimate symbol of that failure.” The Venezuelan elites couldn't agree more; they see this appropriated skyscraper as everything that is wrong with the Bolivarian Revolution: a feared source of “crime” and “anarchy.” The hundreds of families who live there have long rebutted this demonization. Many admit that the Tower of David is not an ideal home, as it is difficult to navigate because of its verticality and the lack of elevators. Many also criticize the Chavista bureaucracy in its failure to provide proper housing. But all who live there agree they are better off in the Tower of David than where they were before. They are proud of the homes they have made with their bare hands, building walls and setting up an electric grid and water hoses to make twenty-eight stories livable. They have, in short, appropriated a vertical node of rubble and turned it into something else: a home they feel attached to. More important, they run the tower along collective principles and feel in control (see accounts by residents of the Torre de David here, here, and here). As Léopold Lambert aptly notes, the occupation of this skyscraper is “a proletarian reclaim of territory.” This is no ordinary territorial reclaim: it is the expropriation by the poor of one of the most revered material totems of global capitalism. 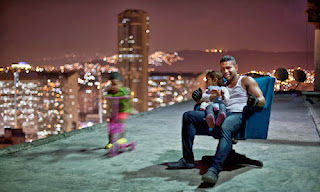 Ruins are potentially disruptive of dominant forms of spatiality because they turn what used to be private or state property into part of the commons. Rubble is matter that belongs to no one and to everyone and that radiates around it a collective spatiality. As I analyze in detail in Rubble, ruins can for this reason create a gravitational force that attracts bodies toward them. In 2007, hundreds of families empowered by the changes created by the Bolivarian Revolution were drawn to the tallest ruin created by neoliberalism in the Caracas of the 1990s. And this spatial expansiveness has become particularly unsettling to people like Anderson because it shatters the phantasmagoria of the skyscraper as a fetish that is supposed to dazzle and impress. 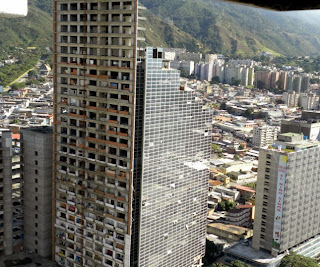 The Tower of David is the only skyscraper in the world that fell into ruins only to be physically appropriated by the poor and turned into part of the commons. In a world in which the commons are being subjected to an unrelenting onslaught of privatizations and physical destruction and degradation, this is not without spatial and political significance. The fact that anywhere else a similar occupation of corporate architecture would have been immediately repressed by riot police speaks of the favorable political context in which it took place. While critics dismiss this subaltern appropriation of the Tower of David for betraying their abstract ideals of “progress” and “decent housing,” this dismissal reveals a visceral, class-based discomfort at the colonization of an abandoned skyscraper by those who allegedly do not belong there. This colonization is spatially subversive because of its affective power to dissolve the phantasmagoria of spectacular space. 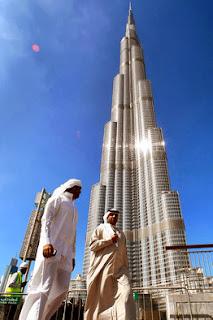 Not surprisingly, many of those who demonize the Venezuelan Revolution idealize the corporate dictatorship that rules Dubai from the height of the most spectacular skyscrapers in the world. Further, the world elites admire those dazzling skyscrapers as their dreamlike class utopia, where the poor are kept in their place (and at the ground level). Shortly after President Chávez died in March 2013, the Associated Press business reporter Pamela Sampson wrote that Chávez invested Venezuela’s oil wealth “into social programs including state-run food markets, cash benefits for poor families, free health clinics and education programs.” “But,” she added, those gains are “meager” compared “with the spectacular construction projects that oil riches spurred in glittering Middle Eastern cities, including the world’s tallest building in Dubai.” This is a transparent admission of the priorities that guide neoliberalism as a system in which the construction of spectacular buildings is seen as more important than the improvement of the living conditions of millions. It also shows how the fetishization of skyscrapers built to attract the gaze encourages a topographic disregard for the world’s poor, who are seen as so devoid of value that any alleviation of their suffering is dismissed as wasteful.
This disregard also reveals the planetary constellations that entangle the skyscrapers of Dubai and the socialized skyscraper of Caracas. The fear of “the tallest slum in the world” is the fear of an unsettling, ominous ruin: an unfinished skyscraper appropriated by a radicalized, nonwhite multitude that is unafraid of rubble and is organized around egalitarian sentiments. In being the tallest ruin in the world, The Tower of David indexes a rupture and a potentiality: the possibility that the crack may expand, multiply, and shatter a space that seemed spectacular.


This essay is a revised excerpt from the conclusions of my forthcoming book Rubble: The Afterlife of Destruction (Duke University Press, August 2014)

Posted by Gastón Gordillo at 4:36 PM